Try out our other games
Play Sudoku Games here
Difficulty: Very Easy
1
2
3
4
5
6
7
8
9
More Sudokus?
Would you like to start a Sudoko from another day?

This will end this game.
Would you like to start a Sudoku with another difficulty?

This will end this game.
Would you like to restart this game?

This requires a reload of the page, which means your Sudoko game will be lost.
Are you sure you want to leave the page?

You're Sudoko game will be lost.
Get free Sudoku puzzles every day on sudoku-today.com

How to play Sudoku
The goal of Sudoku is to fill in a board of 9×9 squares with numbers so that each column, row, and 3×3 block contain the numbers between 1 to 9. At the beginning of the game, the board will have some of the squares filled in. Your job is to use logic to fill in the missing numbers and complete the grid. Don’t forget, a move is incorrect if: You can play 5 new Sudoku puzzles every day with levels ranging from Very Easy to Very Hard. We hope you'll enjoy some fun and challenging Sudoku puzzles.
Keys & Buttons
To play this game you can use a combination of game buttons and keyboard keys.
Game Buttons
Restart game
Reveal the correct number for the marked empty field
Reveal the correct number for a random empty field
Check the board and mark errors with red
Show solution for this puzzle
Print this Sudoku on paper
Keyboard Keys
Move one field up
Move one field down
Move one field left
Move one field right
Delete number in marked field

Move one field left
Tips & Tricks
Great satisfaction is often the reward after having solved a Sudoku puzzle. Especially if it has been a particularly tricky one.

Sudoku is a logic game. Applying strategies to logic games will help you solve Sudoku puzzles more quickly. You probably already use some strategies without thinking of them as strategies. In this section we'll introduce 6 basic strategies.

A traditional Sudoku puzzle consists of a board of 9x9 cells as seen in the picture below. This board has rows (A), columns (B), and blocks (C). Each cell can have a number from 1 - 9. Possible numbers in a cell are called candidates. 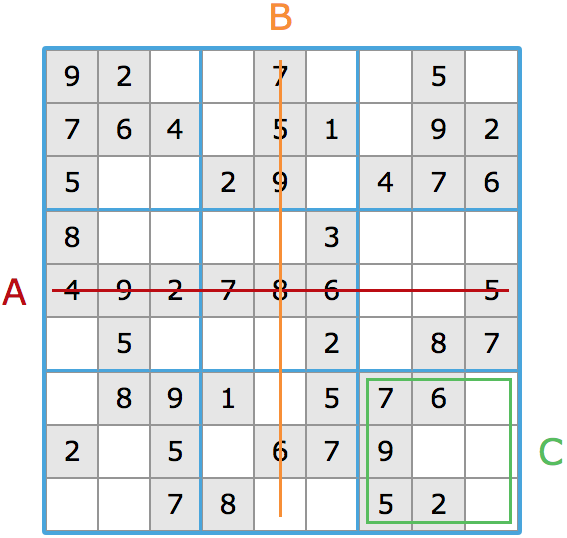 Naked Singles
This is the simplest strategy. If a cell in a row only can have a single candidate number, let it be number 5, then this number (5) must go in that cell. This strategy also applies to columns and blocks.

Hidden Singles
Same as Naked Singles but the same cell can have other candidates as well but they can be removed because the Hidden Single must go in this cell.

Naked Pairs
Same logic as Hidden Singles but now we are talking about two numbers instead of one. If a pair of numbers in a row can only appear in two cells you can savely remove the same two numbers if they are present in the same two cells' column and block. This is also true for Naked Pairs appearing in a column.

Hidden Triples
Again same logic as the previous strategy. However, this time the cells also have other candidates. This simply means you can savely remove these other candidates.
9 Fun Facts
Games like Sudoku?
Just like physical exercise, your mind needs some exercise, too. Doing Sudoku is a great and fun way to do so. However, Sudoku is not the only brain games available. There are many other brain games that can pump up your brain such as crossword puzzles, Wordfeud, Rubiks Cube, and Worduku just to mention a few.

Crossword puzzles
This is one of the best known brain game and comes in all kinds of difficulties. Doing crosswords regularly improves your vocabulary and strengthens your memory.

Wordfeud
This brain game took the app world by storm. Wordfeud was launched in August 2011 and quickly gained hugh popularity. It's inspired by the traditional board game Scrabble where you lay down tiles of letters next to each other to form a word.

Rubiks Cube
Originally called Magic Cube was invented in 1974. Its mainstream popularity peaked in the 1980s and is considered the world's top-selling puzzle game. A traditional Rubiks Cube is covered with multicoloured squares, which the player attempts to twist and turn so that all the squares on each face are of the same colour.

Worduku
Like Sudoku, Worduku uses letters instead of numbers. The rules and strategies used is just like Sudoku.